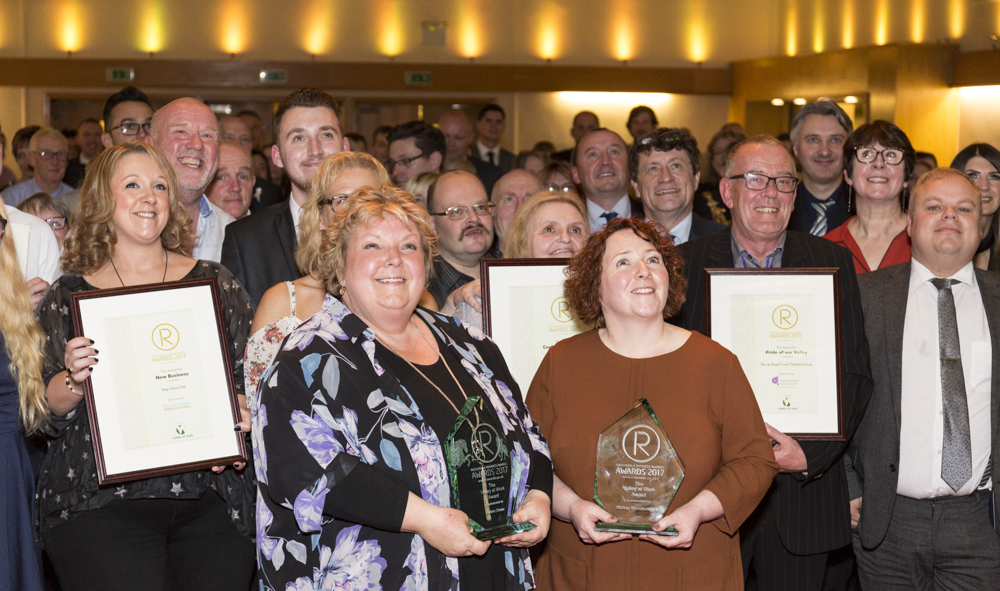 TWO businesswomen were stunned into silence when they were awarded the highest honours at Rossendale Business Awards. To a packed The Riverside in Whitworth, Valley at Work Chair Rob Carder announced that Alison Driver and Melbec Microbiology Ltd had each won a Valley at Work Award. Their entries were declared the most inspirational of the nearly 200 submitted for the 2017 competition.

Alison Driver was a finalist in the Enterprising Woman category, an award that was won to former Deputy Headteacher Gill Smith who now runs her own Connect Health and Wellbeing business. On being presented with her bespoke glass engraved trophy, Alison said: “I am just stunned and overwhelmed. I had never expected that an individual would be considered for this award. It is an honour to hear that I have been an inspiration for other people.”

As well as running her own successful business Metis HR, in Bacup, she mentors businesses and has a number of charitable roles.

Equally shocked was Melbec Microbiology Ltd, of Haslingden, and a shriek could be heard when the company was also named as the Valley at Work winner to add to their Business of the Year title. Owner Dawn Mellors said: “I am shaking. To win the Business of the Year I found amazing, but to get the top award when there are so many businesses much bigger than ourselves, I am delighted.”

More than 200 people were in attendance with finalists and sponsors mixing with dignitaries and supporters.

The Rossendale Free Press award was presented by Stuart Pike and went to Anglo Recycling in Whitworth to reward the company’s commitment not just to running a successful business, but also to helping the community in the town.

A caring group of youth volunteers who give up their school holidays to help primary children experience exciting and challenging days as part of the Wonderful Things project won the Enterprising Young Person category.

Wonderful Things was also a finalist in the Part Time category and MicroBusiness categories and Project Managers Julia Ansell and Kate Crane were delighted with the success of the youth volunteers.

This year’s Pride of our Valley award was presented to the Bacup Royal Court Theatre Group who successfully rescued the much loved theatre.

Mayor of Rossendale Councillor Colin Crawforth was joined on stage by Mayor of Whitworth Councillor Alan Neal and they both sang the praises of the wealth and diversity of businesses represented. Councillor Neal said: “Each and every one of you is a winner.”

At the interval young performers from Bacup-based Dansworks Dance Academy performed a series of stunning and charming routines and a raffle organised by Bacup Cancer Research UK committee raised more than £300.