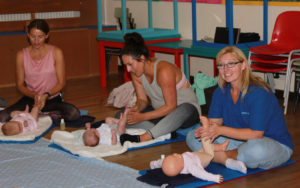 While on maternity leave, Charlotte Daly took her daughter to a baby massage class and turned that experience into a business. Charlotte initially went back to work as a PA, but her heart was at home and she wanted a business that would allow her the flexibility to spend more time with her daughter. She developed Mini Me Time while living in Leeds in 2008 and when she moved to Bacup four years ago, she retained the management of the business in West Yorkshire. She also expanded and added further classes in Rossendale. Last year Mini Me Time celebrated its 10th birthday by winning the Part-Time Business trophy at Rossendale Business Awards. Nominations for this year’s business awards opened on September 18 will close on October 23.

Charlotte said: “When I set up the business there were few activities that were specifically for babies and parents. I managed to get on a baby massage course with my health visitor. I wanted a lifestyle business that would allow me to earn a living while still being able to be a mum to my young family.”

Although having its origins in baby massage, Charlotte realised there was a need for constant evolution and trained in baby yoga then added baby music and movement.

She now offers nine different activities to complement but not compete with existing providers. On moving to Rossendale, she began holding classes at Staghills Children’s Centre. Now Charlotte and another team member run up to 10 classes at venues across Rossendale. She said: “We now have 15 members of staff and two in training and it is a growing business. The majority of my employees are in West Yorkshire, two are in Rossendale, one in Ramsbottom and two are in training another for Rossendale and one for Rochdale. Everyone works part time and I provide the training, the support, help to negotiate venues and marketing of the classes.”

She was shocked to find the business had been nominated for a local award and stunned when she won because of the calibre of the other finalists. Charlotte said: “We got a massive influx of comments on Facebook and other social media and it was really important for us to win such an award in our local area. It brought credibility to the business that we are being run with a good ethos and we are serving the community. To know that the parents valued us was really important because of the nature of the business.”

She said even though there has been economic uncertainty since she set up, the business is meeting a need as parents want activities that help them bond with their children. To allow that to happen, the classes are a fixed fee per family rather than per child.