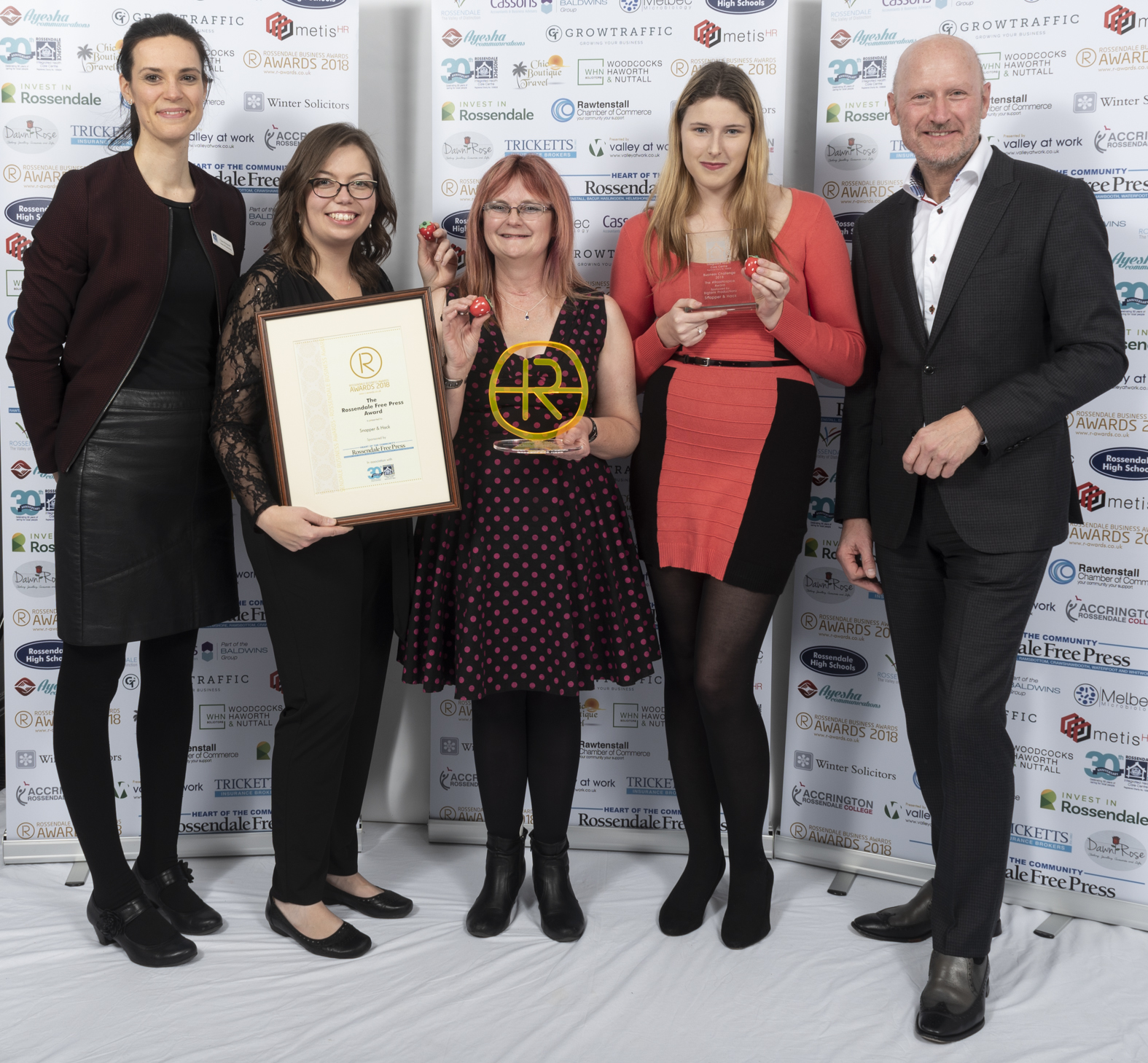 TWO sole traders combined their talents turning skill into goodwill to win the Rossendale Free Press award that encourages businesses to give back. At the Rossendale Business Awards at The Riverside, Whitworth, the Free Press award was this year linked with Rossendale Hospice’s Business Challenge. To celebrate 30 years of the hospice, businesses were given £50 and 10 weeks to make the money grow. A whole range of imaginative ways of fundraising were dreamt up, and judges assessed not just how much the business had raised but also how they used their business skills creatively.

Head of Fundraising at the hospice Clare Richards said: “This was the first time we have organised such a challenge and it was very successful. We arranged it very last minute, but it will happen again next year, which is why we have already launched it and we hope even more businesses get involved. The combined total from all the businesses that took part was more than £5,000 and with the raffle we organised at the awards, the challenge raised almost £6,000.”

Glass trophies were handed out by the hospice for different successes.

Sole trader Ivory Beau won the small but mighty trophy, Rossendales were investment champions raising the most money, Chic Boutique Travel was the innovator running a quirky cruise evening and HD Signs won community conqueror for spreading word of the hospice to all its clients. A photographer and journalist combo Snapper & Hack, Liz Hall from Liz Henson Photography and Catherine Smyth from Catherine Smyth Media won the #RossHospice for their use of social media to promote activities. They also won Rossendale Free Press business award.

A video of Snapper & Hack running a human fruit machine at Weir Fete was seen by nearly 900 people on Facebook and attracted 250 engagements. As three people were needed for the attraction Liz and Catherine drafted ‘pprentice Sophie Jennings to help; she also joined them to collect the award.

It was Liz’s idea to accept the business challenge and as well as the quirky fruit machine, they devised a picture quiz of Rossendale locations taken by the duo and then challenged people to identify them. Liz said: “We are both busy with our own businesses but we have worked very closely together for many years as our talents complement each other. We had great fun raising the money and as both of our businesses use social media to promote what we do, we launched our Snapper & Hack Facebook page as soon as we accepted the challenge. Catherine designed a simple but effective logo and we made sure we kept the page regularly updated, gaining followers along the way. It is still live and we updated our status on the night and reached 242 followers. We were both delighted, and shocked, to win the Free Press award.”

Catherine added: “I love this idea of applying your business acumen to fundraising and we worked hard to sell quiz sheets. No one in Weir will ever forget our four hours of being a human fruit machine. Both Liz and I are also very grateful to student Sophie as we couldn’t have done the stall at Weir Fete without her help.”

Next year’s Hospice Business Challenge will be from June 2019 and to take part email Clare at clare.richards@rossendalehospice.org